While traveling last week, I came across a second negative Selling Proposition that may well be the most negative I have ever encountered. It’s worth taking a look at. The question, of course, is always the same for me. Is this a marketing context that works, and if so, should I be looking for ways to use it?

I had just arrived at my hotel in New York City and was waiting to check in, when I noticed one of those over-stuffed brochure stands that seem to occupy space in every hotel lobby on the planet. It was stacked full of colorful brochures, all vying for me to take a tour or see any one of hundreds of New York sites. After a short time, one grabbed my attention. At first it was the bright letters in its headline but my interest soon turned to the headline itself. What it said. See if it gets your attention.

“How To Avoid The Four Worst Mistakes NYC Visitors Make.” This brochure was an absolute stand out among thirty or so others simply because it was so negative. All of the other brochures featured one fantastic New York attraction after another, and all were characterized as fun and exciting. My initial reaction was to roll my eyes and walk on. What were they thinking about when they printed that? The headline truly turned me off. I did not want to know more. I moved on toward the elevator. Then, I began to think like a marketer and did a 180 back to the brochure stand. I grabbed the brochure and stuffed it into my bag for later scrutiny.

It was only twenty minutes later that I had a chance to read further. I soon discovered the headline, while incredibly negative, appropriately set a tone for the contents of the brochure. It got worse!

The brochure was for a company called “On Board” and it boasted seven “amazing sights most NYC visitors miss.” Here is the list of the seven sights that the folks at On Board Tours want you and I to see while in the great city of New York:

2)  The chinks in the wall of the Morgan Bank building, remnants of a 1920 terrorist attack. What?

3)  The site where the US Air flight went down in the Hudson River. It’s just water. It didn’t leave a mark.

4)  The “Ground Zero” cross, of course. But I think I’ll see that when I see Ground Zero won’t I?

6)  The pier where the Titanic survivors were brought back. Not sure what to look for after all these years.

7)  The “Whispering Gallery” in Grand Central Station. How’d that get in here?


Enough of that. What about negative sales messages?

My experience is that the operating state of mind for all consumers is, “what’s wrong here.” They are literally looking for something wrong and when they think they see it, they will move on fast. When we build a Selling Proposition for a client, we constantly review the message at each step of its development to ensure we have not given them anything to find fault with. In fact, we have a clever way of exposing such things to target consumers and they reject them every time. We even have to be careful when using what we call “negative attributes”, which are those short little bursts of two or three words that seek to overcome a perceived negative in a product or service. An example would be adding, “Won’t leave a residue” on a cleaning product. As a marketer, do you use it or not knowing there may be a significant number of people you will have alerted to a potential problem when you thought you were solving one?

So, absolutely no, never go to the negative.  Stay away simply given the natural human tendency to make you wrong. Good luck and keep it positive.


follow my blog by clicking one of the links below

Over the years I have assumed that a negative Selling Proposition was a bad idea. This also seems to be the unanimous opinion of the corporate marketers I work with daily. I know from experience that consumers, in fact humans in general, all function with “what’s wrong here” as a general operating state. Yes, humans are looking for what is wrong. It seems only prudent to keep your message on the positive side and not give them any reason to find something wrong. Given that, I keep an eye out for such things just in the event there is something new to learn. In over twenty years, I have never used fear or intimidation in a Selling Proposition nor do I recall ever seeing it used by an established brand until now. I will share it here.

Several months back, I had occasion to develop an interest in the heart medication category and it was an eye opener. The category appears to be in the early stages of a credibility crises. I will begin with my close friend Dr. Mark Gordon, a medical doctor who is internationally recognized as a pioneer in the field of anti-aging medicine, and is more recently recognized for his breakthrough work in treating traumatic brain injury. This is the concussion issue we have all been hearing so much about as it relates to the NFL. This is a guy I can trust.

Recently, Dr. Gordon captured my attention when he shared that he has had a cholesterol level of over 280 his entire life and does not take statin drugs to lower it. He further shared that “approximately 50% of all heart attacks happen in patients with normal or low cholesterol and it’s a fact well known in the medical community.” Much to the dismay of the medical community, it has now leaked out into the general public and many people with high cholesterol levels have stopped taking statins. Currently the drug companies sell over 12 BILLION dollars worth of statin drugs annually. You have likely noticed the TV advertising push to keep sales up? It’s huge. If you want to learn more, here is a good place to start:
http://www.businessweek.com/magazine/content/08_04/b4068052092994.htm

Here is what I know. There are multiple functional components to a statin drug, only one of which is cholesterol lowering. Based on the statistic I just quoted, that component would seem to be of no value. Given the complexity of the drug, the drug companies are faced with a dilemma. They can try to reeducate you and me in the details or they can simply try to “pitch” their drug and keep selling in the same old ways. As long as they are truthful, I have no problem with what they are doing. If you listen closely to their statistical claims, you will not hear two alike. There is a grain of truth in all of them but they are misleading and you and I don’t take the time necessary to check them out. Until we do, we will remain confused and they will continue selling their drugs.

One manufacturer has specifically targeted those of you who have stopped taking the drug by trying to intimidate you into returning…it’s Lipitor. Intimidation is present in their “Don’t Kid Yourself” campaign that is now in full swing. Check it out and see if you are offended at the way the man in this commercial delivers his closing line: 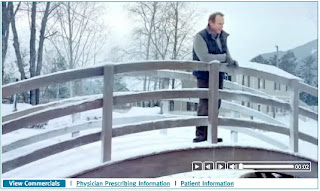 
I would love to know how this commercial was tested. It is not only full of misleading information, it is also risky from a marketing perspective because he is most likely talking down to a segment of the market. I wonder how large of a segment that is?


follow my blog by clicking one of the links below